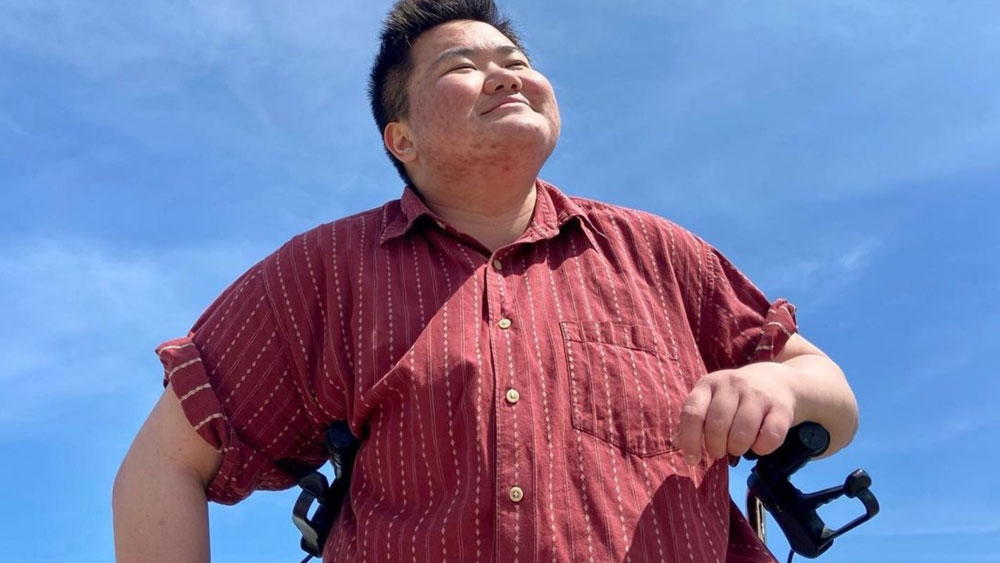 The person I was before was a culmination of self-hatred, dysphoria, societal influences, and bad decisions that came to a head two days before my wedding. I dreamt I was an out and proud transgender man. I knew it was true, and that I had been running from it my entire life. I understood from the moment I awoke that my future would be changed forever, by the simple knowledge that I was not the person I was pretending to be.

Terrified, I bargained with God. I begged for it not to be true. I knew it was.

I stayed in the closet for two more years. Why? Because I believed I couldn’t be transgender and disabled. The intersection of those two identities together were too much in my mind, making me vulnerable to the rampant discrimination and hatred that disabled and transgender folks experience every day. According to the U.S. Department of Justice, “In 2019 the rate of violent victimization against persons with disabilities was nearly four times the rate for persons without disabilities.” The FBI has stated their hate crime statistics show hate crimes against transgender and gender non-conforming folks increased 587% between 2013 and 2019, and that things are only- getting worse. I thought I had to choose one fight in order to protect myself.

At the beginning of my illness, everyone was concerned. People would flock to the hospital. By this time I had lost all of them, having missed out on enough social events and plans. Having been a “burden,” far longer than any of my friends or family had ever experienced illness. While they were partying, living, pursuing their dreams, I was in bed. In pain. I was grappling with life-altering symptoms, only to find new ones that would flare and exacerbate anything pre-existing. It was, and still is, maddening.

While incredibly validating, the process of diagnosis was full of heartbreak.

The illness comes with sores: genital, oral, and/or ocular. The first time I got them I was sixteen, and the doctor was convinced I had herpes. I remember them telling my horrified, Catholic mother – with a fleet of med students in tow-  that teenagers “do it younger and younger these days.” They spoke about me and over me, as I focused my vision down at my purity ring in shame. Partners would be upset if I wouldn’t have sex while my body was fighting off sores, exhaustion, and full-body pain. Even at the time of my diagnosis, I was told I “shouldn’t be so emotional,” for crying on the doctor’s table, legs spread, covered in genital and oral ulcers. My body was no longer my own. It would be five years of this before I would get answers of any kind.

Had I been born a cisgender man, there would not have been as much pointing fingers. People would have valued my opinion right off the bat and seen me as more than a weeping teenage girl who was feigning pain for attention. They might have seen me as a victim, a survivor even, in that traumatic time during such formative years. How am I so sure? Because that is how folks treat me now.

Now that I am perceived as a man – even a transgender one – folks listen. They ask more questions and make less assumptions. Their bedside manner is worlds better. And when I say no, they take that at face value. A study published by the University of Miami in April of 2021 found that, “when male and female patients expressed the same amount of pain, observes viewed female patients’ pain as less intense and more likely to benefit from psychotherapy versus medication as compared to men’s pain, exposing a significant patient gender bias that could lead to disparities in treatments.” (Of course. this does not account for gender non-conforming folks). This has been my experience.

The world may discriminate, but disability does not. It will catch up to most of us by the time we’ve reached the age of sixty.

Through my Behçet’s Disease, I have learned how to advocate for myself and for others – when everyone in the room speaks about and over them. I am not grateful for the struggles I have faced, but rather for the strength I found within myself, forged through fire. I did not ask to be strong, I became so out of necessity. Part of that strength is acknowledging myself for who I am, believing myself when no one else does, and standing firm. Meaning, I have always been a transgender man. And though the life I lived before coming outlasted the majority of my time on this planet, that young woman does not exist. She never truly was. No, I was always August. I just didn’t know how to tell you.

3. University of Miami. “Womens’ pain not taken as seriously as mens’ pain: A new study suggests that when men and women express the same amount of pain, women’s pain is considered less intense based on gender stereotypes..” ScienceDaily. ScienceDaily, 6 April 2021. <www.sciencedaily.com/releases/2021/04/210406164124.htm>.